Editors’ Note: When planning the articles for this adoption issue, Patrick Atkinson of The GOD’S CHILD Project immediately came to mind for the Oh Man feature. He agreed to share his adoption story with us. Here it is, in Patrick’s own words.

Several years ago, the popular book, “Cheaper by The Dozen” told the true story of a New Jersey couple and their 12 children. When asked why they had so many kids, the parents would quickly respond with, “They’re cheaper by the dozen, you know.”

I get where they are coming from. Over the years I’ve adopted or taken permanent legal custody

I decided early on to spend my adulthood saving lives and building families. How? I had absolutely no idea.

College brought me to a pivotal crossroad when I volunteered with a regional crisis line for children and adults, particularly women. They were the runaways, throwaways, and despairing victims of family domestic abuse.

After college, my thoughts were on the crisis line’s women and youth, so I turned down corporate job offers to take a job searching New York City’s streets for runways from North Dakota and the Upper Midwest.

Over the next three years, we returned home hundreds. It was time to dive in deeper.

The 80s were a decade of civil war and bloodshed across Central America, and El Salvador, Guatemala, and Nicaragua were burning. With camera views of children running scared in the streets and Mayan Indian women crawling out of massacre sites etched into my mind, I left New York City for Central America. For the next seven years, I engaged in war-zone reconciliation and post-war reconstruction.

From this work grew the beginnings of The GOD’S CHILD Project; an international charity still headquartered in Bismarck. Founded in 1991, GCP has raised an estimated 80,000 children and cared for countless single mothers, widows, and abandoned women.

While I knew this was a good effort, God had even deeper plans; over the years I was also gifted with nine boys and eight girls with whom I formed a personal family.

Seventeen. Yes, it was a crazy thought, even back then amidst the gunfire, aerial bombings, and wholesale village massacres.

Yet they became my safe harbor when I took off my executive director’s hat and put on my Daddy hat.

They didn’t care that I had met that day with the President, a Nobel Prize winner, or a serial murderer. They wanted Dad to look at their drawings, talk about school, and start grilling dinner.

I didn’t choose the boys and girls to adopt; through fate or circumstance, they chose me. I simply said ‘yes.’ They came from unique situations amidst the region’s civil wars, or from the streets or child-jails where innocent orphans get thrown in with street-hardened gang members.

While most of the children we rescued fit in perfectly with one of our foster families, a select few didn’t. As the months passed and I thought of myself more as their father and they as my children, I realized some children are born in their parents’ bodies while others are born in their heart.

We had wonderful times. We also had our moments of homework, house cleaning, and teenage-dating stress. Every parent does.

Yet I succeeded as a parent because I never tried to be my children’s best friend. Children want us to be their mother or father; someone to tell them to brush their teeth and go back and try again if they didn’t.

I never worried if my adopted children liked me; only that they respected me and knew that I loved them. I took for granted they might come out of adolescence thinking I was the worst dad in the world.

I also knew that in a few years they would realize how lucky we all had been.

My youngest, Kevin, is now married and living on his own, as are they all. Seven have gone to live with God—four by illness, three were murdered. The others are doing well and live in Guatemala, the United States, Canada, and Europe.

I see my now-grown kids frequently and am the proud grandfather to 11.

When the children were growing up, I gave them the choice of taking my last name or keeping their birth name. Different kids chose differently. Two hundred years from now some anthropologist will look at Guatemala, see names like Jose Cay Atkinson Xum, and wonder, “What the heck happened here?”

There are people in our world who open their homes and re-script their lives to care for a child in need of protection and love. We call them foster parents.

The children, however, call them heroes and saints. 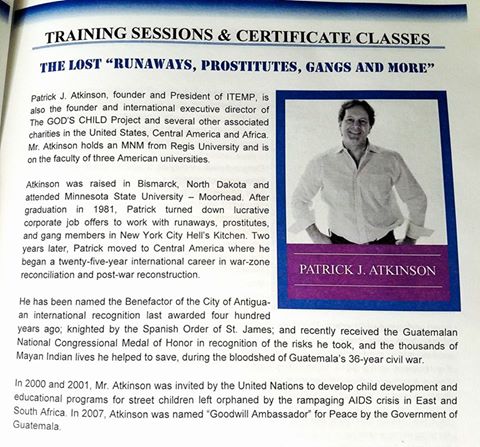 I didn’t choose the boys and girls to adopt; through fate or circumstance, they chose me. I simply said ‘yes.’ END_OF_DOCUMENT_TOKEN_TO_BE_REPLACED