Patrick Atkinson is an American author, educator, and human rights activist. Mr. Atkinson initially worked war zone reconciliation and post-war reconstruction in several nations in Central America during the 1980’s. After working on human trafficking issues in Southeast Asia, he returned to Central America in 1991 and became the Founder and Chief Executive Officer of several charities charities, including The Atkinson Center for Human Dignity, the ‘Institute for Trafficked, Exploited & Missing Persons’, and The GOD’S CHILD Project.

Mr. Atkinson is the author/co-author of several books, including the international-selling Message for My Child and The Powerful You!, the subject of the biography, The Dream Maker, by Monica Hannan, and the recipient of many national and international human rights recognitions and awards.

Patrick John Atkinson was raised in Bismarck, North Dakota and attended Minnesota State University – Moorhead, during which time he worked at the Center for Parents and Children as a crisis line operator counseling runaways and victims of domestic abuse, homelessness, and sexual assault. It was here, where the most common calls revolved around the issues that send youth into the streets: physical and sexual abuse, and alcoholic or drug-addicted families, that Mr. Atkinson learned about contemporary human trafficking in America, a shaping force for his later years.

“Most of them were great kids who didn’t know how to deal with family and school issues,” he told CNN in 1985, and estimates he returned home about 600 teens during the three years he worked the New York City streets.

In 1983 Mr. Atkinson learned about the social conflicts and violent civil wars that were tearing apart much of Central America and especially Guatemala, El Salvador, and Nicaragua. Mr. Atkinson resigned his position in New York City and moved to Central America where he began a thirty-five-year international career in war-zone reconciliation and post-war reconstruction across Central America, Southeast Asia, and Africa. 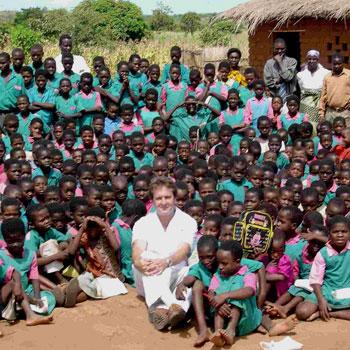 The GOD’S CHILD Project
In 1991, Mr. Atkinson returned to Guatemala, Central America after receiving hundreds of letters from children he had worked with during the 1980’s and founded The GOD’S CHILD Project. The GOD’S CHILD Project is a nonpolitical international humanitarian organization that develops and administers health, education, family foster care, community development, and human rights protection systems in the world’s poorest nations.

Patrick Atkinson is the Executive Director of The GOD’S CHILD Project, which currently cares for and educates abandoned, single, and widowed mothers and their dependents, orphaned and abandoned boys and girls, and provides education, medical care, legal aide, development skills, and human trafficking prevention, rescue, and recovery.

Known collective and informally as El Proyecto, or The Project, Nuestros Ahijados operates several schools as well as The Atkinson Family Medical Clinics, Casa Jackson Hospital for Malnourished Infants, The Bob and Joan Scheel Academic and Vocational Training Center, the Santa Madre Homeless Shelter, the International ServiceTeam Experience (which brings individual and group volunteers from around the world to Central America to build homes, provide medical care, work in schools, and engage in disaster relief.

Nuestros Ahijados is the Central American base of operations for the Institute for Trafficked, Exploited & Missing Persons.

Institute for Trafficked, Exploited & Missing Persons
In 2001 while working a side contract in Southeast Africa for a branch of the United Nations, Mr. Atkinson was held at gunpoint while a group of men kidnapped young women and teenagers from the village where he worked and was staying overnight. He left there committed to extend his work into human slavery, and founded the ‘Institute for Trafficked, Exploited & Missing Persons’ (www.ITEMP.org) as one of the United States’ first contemporary anti-human trafficking groups.

While most of ITEMP’s work is international, Patrick and staff have done victim rescue, recovery, and prevention in 38 nations worldwide, including across the United States. ITEMP is a nonpolitical, nonsectarian international program that works with national, regional and community governments, organizations, and nonprofit agencies in the United States and across Central America. ITEMP’s goal is to prevent international human trafficking, as well as engage in situation detection, investigation, intervention and rescue, recovery, and rehabilitative services. In addition, ITEMP’s staff provides human trafficking victims with legal assistance, prosecutorial assist, and social reinsertion support. Mr. Atkinson is the Executive Director of ITEMP.

ACA de Latin America
From 1983 – 1989, Mr. Atkinson engaged in war conflict resolution and post-war reconstruction while founding and directing the ACA programs in the Guatemalan Highlands and Guatemala City, Mexico, Honduras, and Panama, in which he created a network of crisis shelters, clinics, group homes, and legal support centers for war orphans and street children. He also conducted significant pre-program establishment groundwork in Columbia, Haiti, El Salvador, and Nicaragua.

CIF Southeast Asia
From 1989 – 1991, Patrick Atkinson was the Executive Director of CIF Southeast Asia where, from his base in Singapore, he worked with the US Department of State and several national and regional government agencies to document forced labor and sexual human trafficking in the Philippines, Malaysia, Vietnam, Indonesia, Thailand, and India.

Patrick Atkinson has been the recipient of many regional and international human rights awards. Among these are:

Mr. Atkinson is the subject of the international-selling biography, The Dream Maker, by Monica Hannan (April 2006). This internationally-selling book focuses on Mr. Atkinson’s childhood and rescue from a near-death experience, his years in Central America engaged in war-zone reconciliation and post-war reconstruction, and his founding of The GOD’S CHILD Project, the Asociación Nuestros Ahijados, and the ‘Institute for Trafficked, Exploited & Missing Persons’.

He is in constant demand as an inspirational speaker on health, education, human trafficking, poverty, and family-related matters, and has spoken to hundreds of community organizations, religious groups of all denominations, and schools including M.I.T., John F. Kennedy School of International Affairs at Harvard, Brandeis University, Regis University, Boston University, University of Memphis Law Center, UCLA, the Carlson Graduate School at the U of Mn., and has been interviewed in media outlets such as Time Magazine, CNN, The Los Angeles Times, The Huffington Post, BBC, and Christian Science Monitor.

Through The GOD's CHILD Project family of organizations, care facilities and teams of volunteers, the mission to "Break the Bitter Chains of Poverty" is brought to life. END_OF_DOCUMENT_TOKEN_TO_BE_REPLACED

A young Mayan survivor of Guatemala's civil war realizes her dream of becoming a lawyer 15 years after being rescued as a child. END_OF_DOCUMENT_TOKEN_TO_BE_REPLACED