It’s Sunday night and family night, and everything is just about perfect. The fireplace is blazing and family stories are being told. The in-laws are over for the evening, and photos are being shown.

There’s your youngest daughter at band camp, and your oldest boy grinning from a canyon’s stony edge.

Grandma laughs as she flips through these photos, and then laughs even harder when she sees you covered in balloons from last summer’s party. Next up are the brilliant and colorful photos of your middle child’s naked body standing in front of the bathroom mirror. Uh, Grandma?

Welcome to the newest city in Unexplainable-land; sexting. Sexting is the taking and sharing of sexual photographs or explicit messages via text messaging, email, or the web. While experts differ on statistics, sexting is a new teen reality since 25% of girls and 20% of boys admit to having sexted, and 45% admit to having received a sext.

We didn’t have sexting when I was a kid because, well, there were no digital cameras and there was no internet. There was, of course, Polaroid instant photography which was invented in the 1950s. Like modern digital photography, Polaroid’s snap-and-peel instant photographs almost immediately created a new-found privacy since it removed the need to involve a photo-lab technician.

The result was, apparently, liberating since the Polaroid Company estimates 10% of its instant film was purchased for ‘intimate’ moments. With the exception of closed-door clubs, prostitution, and pornographic profiteering, these instant photographs were usually taken, shared, and kept for oneself or just the intimate other. That’s no longer the case with our children.

Thirty eight percent of teens say exchanging sexy photos and texts make dating or hooking up with others more likely, and 29% of teens believe those who exchange sexy content are ‘expected’ to date or hook up.

Staggering to even my well-seasoned professional imagination, though, is that 87% of all youth who send a sexual picture of themselves to another person expect the receiver to keep it private or delete it. At the same time and quite to the contrary, 71% of all youth say they would share with other people or post online an intimate photograph they received from someone else, even from their boyfriend/girlfriend.

We live in a world quite different than the one we grew up in; today’s technological world means anything can be sent, accessed, copied, retrieved from deletion, posted and re-posted, and seen by huge audiences… by millions… with no possibility of even the sender being able to control information once it hits the internet.

Peer pressure on children and teens can be tremendous, but while alcohol consumed or a cigarette smoked is a passing moment with little long-term consequence, sexually-themed photographs or texts can become excruciatingly public. With just a few keyboard clicks, embarrassing words can be added, and public comments solicited from friends and strangers alike and posted. The subject is almost always humiliated and feels regret, and suffers bullying, isolation, shaming, anxiety, depression and sometimes suicide.

The digital permanency and universal titillation of sexted photographs can have lifelong, career-altering consequences… all the result of a life-altering decision, made long before the critical parts of the brain involved in decision making are fully develop around age 25.

To avoid public embarrassment, children and teens who made one bad decision can be extorted, or blackmailed into becoming someone else’s unwilling sexual partner. The now-victim’s agreement to consent never stays ‘just once,’ though, since almost any agreement to give in to extortion opens the door to permanent surrender of self to the blackmailer.

Besides public education, parents, schools, and community leader have had few successful ideas about how to stop their children from making a potentially life-altering decision like sexting. Lawmakers and law enforcement have recently stepped into this void to emphasize the serious and severe consequences of sexting. With increasing frequency, children and teens are being criminally charged with producing, distributing and possessing child pornography. If the photograph goes across state lines, which is ridiculously easy with the internet, a sexted photo, even of oneself or a friend, becomes a federal felony.

When I signed up to become a parent, I should have been made to read hundreds of pages of disclosures and sign dozens of waivers. But I didn’t. I said, “Okay” and the rest, well, you know. Fortunately my children are past the age of not understanding the consequences of sexting, but for parents with children still under the age of 25, here is some pretty sound advice:

• Understand what sexting is and learn how many children do it. Google the word, read about it, and consider the possibility that your child is the one in four who has done it. Do you have five children? Do the math.

• Talk to your children about sexting so they know you are aware it exists. Remind them that once an image is sent, it can never be retrieved or controlled, and that nothing sent over the internet is ever really erased. Ever.

• Talk gently with your children about social pressures, and especially those that involve sex, sexuality, and the possible motives of someone asking your child for sexually intimate photos. Entire for-profit websites exist of naked children who thought they were sexting to their boyfriend-today / ex-boyfriend-tomorrow, or to a good friend. Tell them that no matter how big the social pressures are today, the potential humiliation tomorrow can be hundreds of times worse.

• Remind them that they, and no one else, are always responsible for their life. Buy them a copy of my book, “Message For My Child” and if you can’t find it or afford it, email me at Director@GodsChild.org and I will send you a copy for free. This book makes a great Christmas stocking stuffer – if you’d like to buy copies online, you can do so at Amazon, Barnes & Noble, or our very own GCP Online Store.

• And check out www.ThatsNotCool.com, a great site that also explores sexting.

Grandma loves you and she loves her grandchildren. She wants to hear their stories and see their photos. She just doesn’t want to find on the internet, or be told about, the photos your son or daughter snapped for a friend thinking they were going to disappear in minute, yet are now floating around forever.

You don’t want that, do you, Grandma? Grandma? 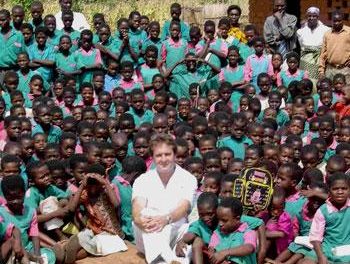 The History of Crying Hill

Planet Internet: The World’s Most Amazing (and Dangerous) Non-Place

Bullying doesn’t just happen like a spontaneous playground fight; it’s an intentional, aggressive and well-thought out act. It is also repetitive in nature, and always involves an unequal balance of power. END_OF_DOCUMENT_TOKEN_TO_BE_REPLACED